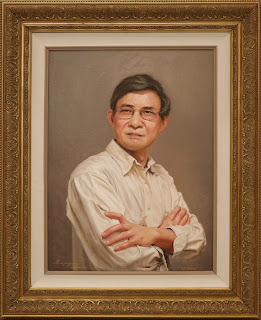 Suping Lu, University Libraries’ Professor completed his eleventh book on the Nanjing Massacre. Occurring in Nanjing, China in 1937-38, the massacre was in the former capital of Jiangsu Province. Suping was recently interviewed on camera to be included in one program in a series of documentary films Jiangsu TV produces. This film commemorates the massacre and airs in December only on the Jiangsu network in China with a tentative global release at a later date.

During his interview, Suping shared details about the vital role American missionaries played working together with German businessmen to establish a safety zone in the city. They provided shelter, food and protection for the refugees against Japanese atrocities. In addition, five American and British journalists first reported the Nanjing Massacre and four American doctors and nurses worked at the University of Nanking Hospital, the only hospital open to the public.

Suping grew up in a small city just 40 miles East of Nanjing. Prior to his employment at the University Libraries in 1994, Suping’s knowledge of the massacre was minimal. On a museum visit with his father, a brief exhibit near the end of the museum offered his first glimpse into the massacre. Suping attended college in Nanjing and began to study the massacre in 1997. In 1999, he visited the Yale Divinity School Library where descendants of the American missionaries in China had donated essential materials from Nanjing. Because of Suping’s extensive research of these materials, he is now a distinguished scholar of the Nanjing massacre.

Essential to Suping’s successful research for American diplomatic documents is one man, Milton O. Gustafson. Suping met Gustafson at the National Archives in Washington, D.C. As a department of states archives expert, Gustafson was critical to Suping’s ability to access these classified documents. Since the documents were not listed under the name of the massacre or by their authors, Gustafson declassified the documents and offered guidance in locating them.  Coincidentally, Gustafson was a 1969 graduate of the University of Nebraska-Lincoln.

In 2000, while on staff for the University Libraries, Suping secured a grant to conduct further research at the National Library in China and returned home to visit both Nanjing and Beijing. During the following years, he secured more grants to conduct additional research on this subject in London, Paris and Berlin.

Suping learned English at an early age so he could become an oil painter. When Suping isn’t researching, he spends his time creating art including the above 2017 self-portrait.