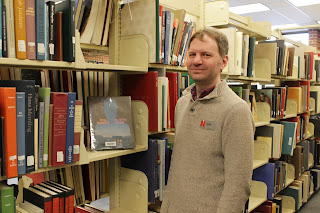 It felt food poisoning, but it was short-lived. Zach Eden chalked the episode up to heat exhaustion and dehydration after being outside most of the day in mid-July 2019.

But several days later, he was sick again and when he suffered a third bout, Eden went to the emergency room.

In rapid succession, Eden was facing a diagnosis of melanoma and was in surgery to have one of three “growths” in his brain removed. Doctors told Eden that because he was young – 38 years old – healthy and showing no cognitive problems, his prognosis was great.

Eden stayed with his parents after the surgery to recover for a few weeks. Then he was back at work in access services at Love Library as classes began in August.

Eden followed his treatment plan to shrink the other tumors, which included several immunotherapy sessions. Headaches and nausea were worse in the mornings. At the end of October, Eden received good news – MRI scans showed the tumors in his brain were shrinking. But his battle with cancer is far from over. 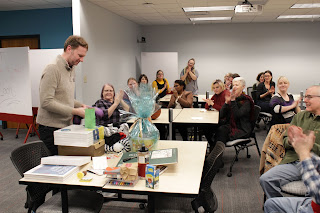 Eden’s perseverance and positive attitude led to his nomination for the Magic Moment from Union Bank, which he received Dec. 11.

“Each year we invite community members to submit nominations on behalf of neighbors, friends or family who are in need and deserving of something special around the holiday season,” Jill Mlinar, Community Engagement Officer for Union Bank, said.

Union Bank is in their 17th year of offering Magic Moments to the Lancaster County community. Nominations are reviewed by a committee, which selects 10 families or individuals in need. Eden was nominated by his former third-grade teachers, Judi Wittwer and Julie Matteer. The teachers are close family friends and they remember Eden as a student drawing dinosaurs on his class work or bringing in snake documentaries to watch with his teachers. Over the last few months they have been supportive of Eden and his family. They have witnessed his determination to overcome his diagnosis.

“Facing cancer is daunting and has rocked Zach’s world. We wanted to let him know people cared about him,” Wittwer said.

Matteer described Eden as the “kindest, most genuine person I know,” and wanted to do something to help him make life easier. They both recognized Zach’s positive attitude and laser-like focus on beating the cancer.

“It seems that no matter what challenge he faces, he is resolute. We can all benefit from Zach’s inspiration,” Wittwer said.

Through it all, Eden has exhibited a calm and upbeat demeanor. He focuses on what needs to be done in the moment and consciously visualizes being steady to avoid the extreme ups and downs of an emotional roller coaster. He does admit he is afraid of losing memories of and around the people in his life.

When friends and colleagues discovered he was in the hospital, the outpouring of texts and calls was overwhelming.

“I heard from about 90 people and their support meant so much to me,” Eden said.

More than 50 of Zach’s friends and colleagues from the University Libraries attended Eden’s Magic Moment, where he received a surprise visit from former Husker basketball coach Tim Miles. Eden is a rabid fan of the Huskers and never got to meet Miles. Miles signed a basketball for him.

“We can see how loved you are and that everybody is behind you,” Miles remarked.

On November 18, 2019, the C.Y. Thompson Library on East Campus will be relocated and open in the former Dairy Store of the Food Industry Complex. The type of services provided include: an ASKus service point, course reserves, delivery/ILL material pickup, Wepa print kiosk, public computers, and study spaces.

Library services will remain in this location until the renovations to the C. Y. Thompson Library/Dinsdale Family Learning Commons are complete in about 18 months. Weekend hours will finish at the LDRF on Sunday, November 17.